L’Arcadia is situated in the middle of a farm spread out over 12 hectares. 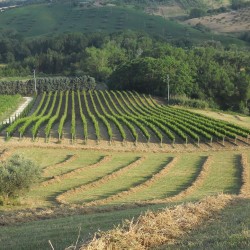 L’Arcadia is situated in the middle of a farm spread out over 12 hectares. It faces south and, from the top of the hill, it gently slopes down to the river Piomba that is L’Arcadia physical boundary as well as its most “natural” corner. In fact the Piomba’s valley has been included in the Safeguard of Natural Environment Plant of the Regione Abruzzo.

At the farm we have got vineyards of Montepulciano d’Abruzzo DOC, along with olive and various fruits groves. We also grow cereals such as wheat, corn and sunflowers, according to the rotation of crops.
The name itself, L’Arcadia, learly summarize the main features of our agriturismo: a wonderful place that deliveres times of absolute silence as well as a stunning landscape that ranges from the Adriatic Sea, over the gentle profile of the hill surrounding Città Sant’Angelo, up to marvelous mountains Gran Sasso and Laga.

Some say that Città S. Angelo is the same as the “Angulum” mentioned by the Latin historian Plinio in his work “Naturalis Historia”. This has not been officially proved, but surely many archeological findings confirm a large presence of our Roman ancestors in this area.

The first documents where Città S. Angelo appears date back to the First Middle Ages, just when the so called village of “Civitas Sancti Angeli” was provided with those wall fortifications that are still one of the most distinctive marks of Città S. Angelo.

After that arguments occurred between Città S. Angelo and the emperor Federico II who later ordered for Città S. Angelo to be destroyed, but he was only partially successful!

From then on, Città S. Angelo has always been one of the main players in the local history alongside with other important villages in the area such as Penne and Loreto.

Nowadays Città S. Angelo is a lovely medieval village of the 21st century! It managed to preserve the taste and the uniqueness of those times; therefore, although it is a lively and fast growing village, you can still enjoy places in the old town centre where it seems that time stopped some centuries ago…!